Last week I was in Boston for 36 hours for a 2 day conference. My plane landed about 5 hours before the conference started, so I knew I had a few hours to check one or two things off my “to see” list for Boston. Two of those things were to see Fenway and to walk the final mile of the Boston Marathon course. Lucky for me these things are very close together, so it easily worked for me to do both!

I started off at Fenway, and spent some time walking all around the stadium! I’m a Red Sox fan, so it was great to finally be there in person! 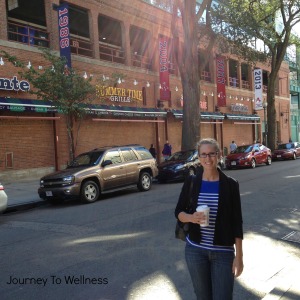 After I had my fill of Fenway, I started off down the final mile. It was fun to see the streets I’ve seen on TV while watching the marathon. It was fun to imagine the thrill and excitement that runners felt as they ran those final steps down the street. But then I hit 755 Bolyston street, where the second bomb went off on Marathon Monday. The Forum Restaurant, as well as a Starbucks, is located there. I walked along both sides of the street there, amazed that this place where people were chatting outside pleasantly was the scene of so much chaos that day. 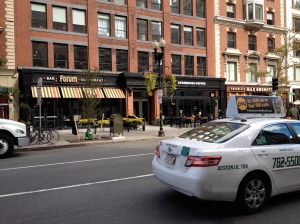 Blue and yellow hearts wrapped around a light pole in front of the site.

After a few minutes, I kept walking those final steps of the marathon route. After passing the place of the 1st bomb (671 Bolyston) that went off, I walked myself right across that finish line.

I don’t think I’ll ever run a marathon, but even if I did I KNOW that I wouldn’t be fast enough to every qualify. Every year I watch the Boston Marathon with so much excitement, so even though there was definitely sadness in my heart standing in the place where bombs went off and people were injured and killed, there was also happiness as well in getting to imagine the excitement of Marathon Monday. 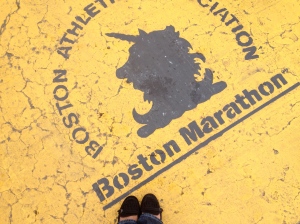 Standing on the finish line 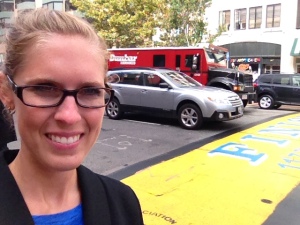 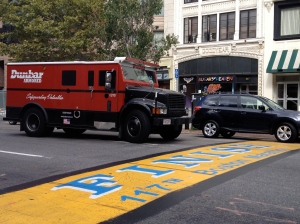 The few hours I got to spend in Boston were really fantastic, and it felt like I spent many more hours there than I actually did. I ended up walking a total of 6.5 miles  through that area, and really enjoyed my time. It almost made getting up at 2 am that morning for my flight worth it…

Now it’s your turn to share! Have you been to the finish line of the Boston Marathon? If you could see anywhere in Boston, where would you go?