I was given a free bib in exchange for talking about this race. No other forms of compensation were offered, and all reviews and thoughts are my own.

This year as I set my goal to run 13 races in 2013, I hoped that I could find a “fun run” to do! I’m so excited that I had the opportunity to run Color Me Rad, and that it was my first official fun run! This race really was “rad” and I loved each minute of it!

On the website they say to arrive 45-60 minutes before your wave starts. Because I had to pick up my packet (and I try to arrive places much earlier than usual- and luckily this saved me last week!), I tried to get there about 8:40, giving me an hour and twenty minutes before my wave at 10 am. If I had been much later, I wouldn’t have had time to get everything done, so if you don’t have your packet already, make sure you get there early to park and stand in line!

Waiting for my wave to start was fun! They broke up the 10 am wave into 4 or 5 smaller groups, letting each group go after 3-4 minutes. They played music, had a dance party, and threw color down on us before we started! The time flew by, and by the time I crossed the starting line I had a smile on my face and a bit of color on me already! 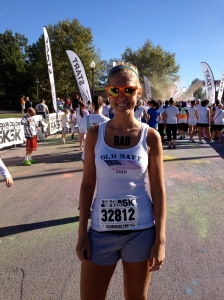 I definitely didn’t run any sort of running appropriate outfit, but it worked for a 5k. I wore light gray “comfy shorts” and an old navy 4th of July tank top for 2010. These worked just fine. The sunglasses came with the registration pack up, which was really nice. You DEFINITELY want to have sunglasses or goggles on with all the powder flying around! 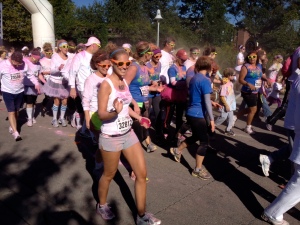 At the start, not much color yet

There were five color stations throughout the run (not including the start or finish), and three were cornstarch colored powder, and two were liquid color that volunteers sprayed on us from a hose! These colors mixed together to create quite the final splash of color at the end! 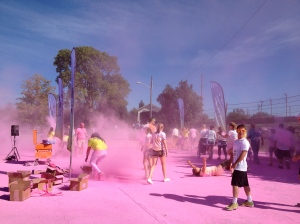 Happy looking, right?! Notice the girl on the ground rolling around in the color.

The color stations were lots of fun! Seeing them in the distance it looked like smoke bombs were going off. The volunteers had handfuls of the colored powder and would throw them on you when passing. I think because I ran alone (instead of most people running with friends or family), I got a lot more color on me than a lot of people who were in my wave. A note here– keep your mouth shut when going through these color stations. The first one I went through I was laughing, and I got a mouthful of the powder. Have you ever inhaled cornstarch? It’s not so pleasant, and my throat and lungs were a little irritated the rest of the day.

I didn’t go into this race thinking that I was going to PR (or even trying to PR! I just wanted to have fun!), but I ended up running only about 2 minutes than my PR anyways. I did a lot of weaving in between people since A LOT of people walk this race, and I was so thankful for the water around mile 2! I definitely needed to try to clear out some of that powder from my mouth! Right before the finish they handed out individual color packets to throw at the finish line! 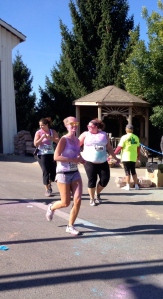 And then I kicked it to the finish! They were blasting music and the laughter and fun were thick in the air, as was the color bombing at the finish! 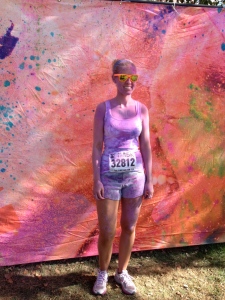 Immediately post race! I got way more color on me than I was expecting!

I cannot say enough good things about this race! The environment was awesome and the energy was high! The volunteers looked like they were having a blast every minute, and were helpful with questions pre-race. The registration tables were a little messy, so like I said at the beginning, plan some extra time to get there and get your packet! I would do this race again in a heart beat, and think it’s a great race for family and friends. 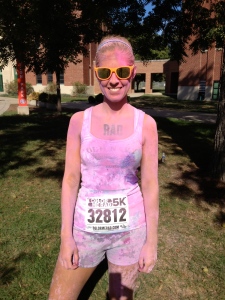 Even after a shower I haven’t been able to get all this color off….

I brought a towel with me to sit on, but before I did that, I rubbed myself down to get off most of the loose powder. I took my shirt off and carefully folded it in a plastic bag, and I am hoping to find a way to save the color on it. Definitely bring a towel to protect the seats in your car… of course unless you want the powder all over it! I would also suggest bringing paper towel so you can wipe your teeth off if the powder gets in there (or… you know… be smart and keep your mouth closed through the color stations!). This race was the perfect way to kick off my Saturday, and a fun addition to training for my half marathon!

Now it’s your turn to share! Have you ever done a fun run before? Would you like to do the Color Me Rad race? (if so- sign up! It’s worth it!) 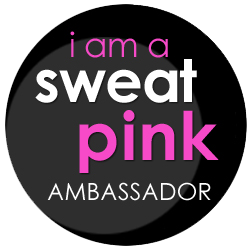